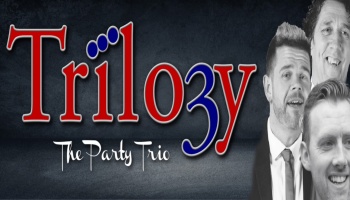 ‘A Night of Legends’

Trilogy’s ‘A Night of Legends’ has already been the highlight of many events and parties all over the UK.

Each singer is already an established professional tribute artist – Tommy as Gary Barlow, Hefin as Neil Diamond and Danny as George Michael.

This is followed by a 30 minute mixed party dance spot performed by all three of the boys.

A classical set can also be added to the show, performed in the style of Il Divo with all three singers, perfect for listening to at a dinner event.

3 fantastic singers in their own right Tommy, Hefin and Danny have come together to make one awesome group known as ‘Trilogy’

You, the client, can choose from their 3 distinctive shows; Trilogy Party Trio, Trilogy ‘Tre Divo’ a tribute to Il Divo and the musicals or Trilogy ‘A Night of Legends‘

Whichever show you choose, you will be in for a triple talent treat. We give you ‘Trilogy’

Do you want to party like you’ve never partied before? If so then we have the perfect trio for the best party night in town! These three super singers have now come together to perform their Trilogy Party Trio Show.

Customers say it’s the best show they have seen in many years and are coming back time and time again. Humour, ad-libbing and audience interaction is all part of this professional show and every song is sung to perfection with stunning three part harmonies. They have carefully choreographed each song in their sets to make this both a musical and visual treat.

Songs that feature in the show can include: One Night Only, Mustang Sally, My Girl, Soul Man, Higher & Higher, Sherry, Sex On Fire, Ain’t No Stopping Us Now, Plus Many More.

Trilogy’s one hour set of classical, opera and the musicals is an amazing performance of many mega hits performed by the world famous Il Divo and other popular pop classical crossover artists.

The voices of Danny, Tommy and Hefin work together so well in three part harmony and each takes lead on songs throughout their performance which has received standing ovations many times.

Songs Can Include:
Regresa a Mi
Nessun Dorma
My Way
The Power of Love
You’ll Never Walk Alone
Amazing Grace
Bring Him Home