About The Munich Bierkeller Men

The Munich Bierkeller Men were formed by Accordionist Nigel Jackson who performed his apprenticeship by landing a residency at the well known Bierkeller in Birmingham.

On leaving the Birmingham Bierkeller Nigel worked with several Bavarian bands performing all over the UK & abroad gaining invaluable experience in the Bavarian world of entertainment. Nigel’s quest was to find his own band of elite performers, he wanted a versatile band that would appeal to all age groups and capable of working at all types of venues & recreating that Bierkeller atmosphere with traditional Bavarian music. He molded the band to supply a fast moving thigh slapping, exciting Oompah show with strong emphasis on audience participation & fun!

The Munich Bierkeller Men have become one the most sought after Bavarian Bands in the UK. They have appeared on the same bill as many household names including Frank Carson, Jim Bowen, Mike Reid, Showaddywaddy, Des O’Connor, The Barron Knights & The Dreamers to name but a few.

The success of The Munich Bierkeller Men is their ability to capture the audience instantly and maintain their interest throughout the full show which leaves audiences begging for more.

With their vast experience and ability to guarantee the success of each function, it is no wonder that The Munich Bierkeller Men are the UK’s No. 1 Bavarian Showband.

So come and join them for an evening of fun and mayhem, they can tailor the show to cater for everything from small parties to beer festivals & everything in between. 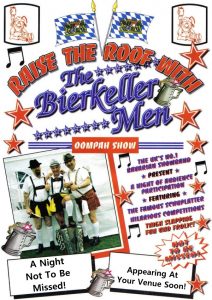 The UK’s Number One Bavarian Showband

A Night of Audience Participation